Rob Fidel: My advice is to just be a good person 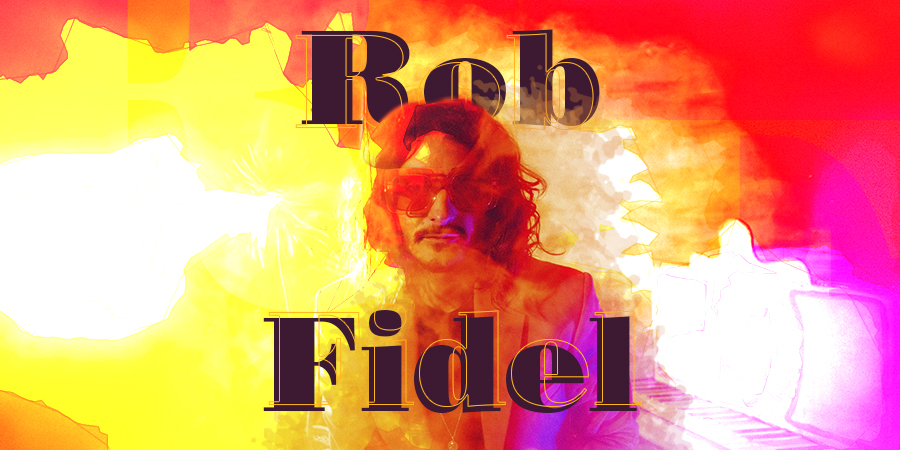 «My advice is to just be a good person, surround yourself with a great support system if you want to make a name.»

Rob Fidel is an artist based in L.A. His art is really interesting and specific! He decorates videos using only those things that he has ready at hand. He works in visual art for some years, and created a lot of wonderful things for singers. Rob works with such singers as Bad Suns, Glossies and Lauren Ruth Ward.

Rob’s contribution in «Super Bullshit» & «Wise Gal» is invaluable. Also, he recorded single «Cosmic Blue», which became his first own work. If you want to feel something fantastic just read interview with Rob Fidel and catch inspiration.

Asia: Hi. Thank you for your attention to our media. I hope that you are well. First of all, tell me about yourself. What are some facts that describe you as a person?

Rob: My name is Rob. Im a colorblind and left handed. I’m originally from New Mexico but I grew up in San Diego. I currently reside in Los Angeles, California where I work in film and TV as an art director, carpenter, and set decorator. I have spent the last 8 years touring the country in bands and am now I’m pursuing a solo career in music.

Asia: I know that you are able to create decorations using only paper and cardboard. How did you come up with this idea, connecting your life with visual art and design?

Rob: Yeah you’re referencing the set I designed for my album artwork. I made it all from foam core and paper because those were the materials I had around me. I didn’t really want to spend too much money on the project and I also wanted to recycle materials I had used for precious jobs. I chose to make a desert scene I guess to kind of reference my past in New Mexico. The landscape is so beautiful and they have the most amazing sunsets. I also wrote a lot of the songs for the EP on piano so I wanted to feature one that was kind of saloon/western looking. Almost cartoony. 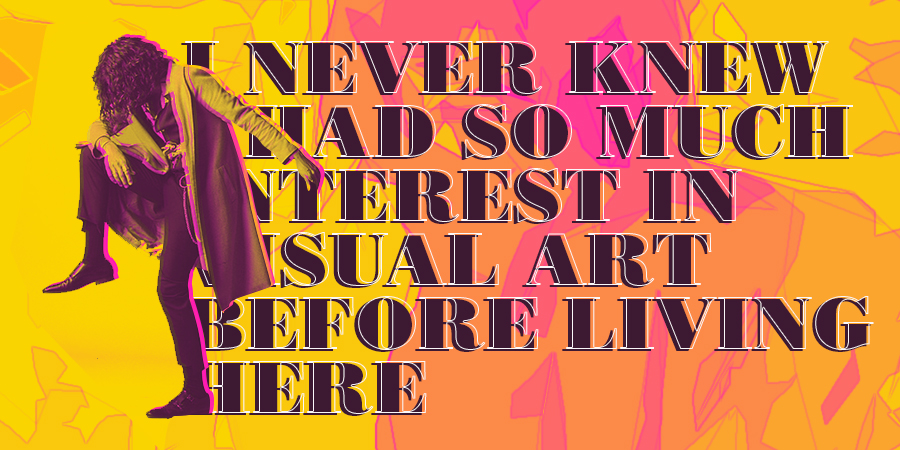 Asia: You are also a singer and songwriter. How did your career in this field begin? What band did you okay with? I know that you moved to LA in 2016. What are some interesting things that have happened to you since then?

Rob: I was previously in a band from Oakland, CA called Tumbleweed Wanderers. I met the other singer in that band in college at UC Santa Cruz. We left school at the same time and it just felt right to continue making music and pursing that dream. We released 2 albums and a few EPs in the 4 years we were together. Touring and making music with those guys was some the most fun Ive ever had. We disbanded in 2015 and I moved to Los Angeles. It just made the most sense for my career at the time and I would be closer to my family in San Diego.
Hmmm interesting things that have happened to me since then…? Well I never knew I had so much interest in visual art before living here. Or an interest in working in the film industry. Its hard to believe that I get to do this for a job sometimes, its so fun. I get payed to make things with friends.

Asia: Congratulations! We are happy you finished your first single, “Cosmic Blue”. We want to know more about the making of this song and how you prepared to record. How do you feel about the song? How long did it take from the beginning phase to the release date? Who did you work with on it?

Rob: Hey thanks! Im really happy with how Cosmic Blue came out! I originally made a demo of that song with my friend Jeremy (from Tumbleweed Wanderers) on his reel to reel tascam tape machine. We used a drum machine and it immediately felt like a good vibe. I came up with the chorus first and the background vocal melody. The song is about a first date. There was a crazy rain storm and all the power in LA went out. There were flash floods warnings and we were forced to stay inside…kind of like how we are now haha. Anyway, it actually turned out to be an amazing experience because we were able to just get to know each other without any distractions from technology or other people. We just listened to songs on my phone and ate pizza at home. I worked with my pal and producer Elijah Thomson on this song as well as the whole EP. Frank Lenz played drums, Eli played bass, and Drew Erickson was on keys. Cosmic Blue is out now and I will be releasing the rest of the EP later this spring. 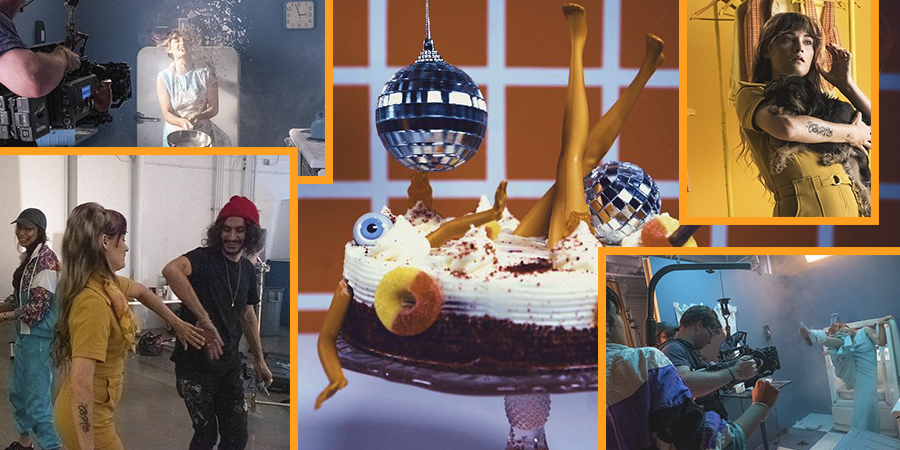 Asia: Let’s talk about your visual art again. You were the designer for some songs. You worked with Lauren Ruth Ward, Bad Suns, and Glossies. What was this
experience like? I saw Lauren’s video, “Wise Gal”. Your work is amazing! Can you talk about that style and the main idea for using it?

Rob: I loved making that music video with Lauren! We have worked on so many projects together now I lose track haha. That was such an incredible experience. Everyone on the crew was so talented in so many ways. It felt like such great team effort. So for the video idea we kind of just went off what the song was about. I made 3 different sets for Lauren, all kinda old stereotypical ‘house wife’ settings. Kitchen, Ironing room, bathroom. Obviously the idea was to break these stereotypes so there are a lot of playful images that reference that. I wanted to make every set have its own sort of color pallet. The kitchen was blue, laundry room was yellow, and the bathroom was pink and green. It was such a fun experience, I can’t speak more highly of the crew and Lauren of course.

Asia: You are also doing animation for “Bullshit”. It is interesting — your style. I would appreciate if you expanded on the specific style used in the video.

Rob: Yeah, Super bullshit was the first animation project I did with Lauren. She basically had the video shot and edited (by her talented friend Tess) and she wanted to give it a little more of a vibe outside of just studio footage. All the footage was shot them recording the song. It was high energy song and I wanted to have a lot of movement and color for the animations. It was so well shot and edited I felt like I didnt really need to do much. So I just drew a bunch of blobs and things coming out of their eyes haha. I am however reallllllly really excited about the music video for “Must Be Nice” that we just worked on together. Its full tilt animation and such a hypnotic psychedelic experience. I think she is releasing that soon.

Asia: How long does it take to create one work? (In reference to the cardboard pieces)

Rob: It took me about a couple days to make that set for the Cosmic Blue album art. I work fast and long hours when I’m into a project haha.

Asia: Quarantine is changing the lives of many people around the world. How has life changed for you? Knowing that you’re a singer, a singer needs concerts to have a career. What is this career field like given the current situation?

Rob: This quarantine lifestyle is so strange. Of all the things that I thought would happen in my lifetime this experience isn’t really one of them. Its been really sad to see so many people losing their jobs and places going out of business. I was about to leave to New Orleans to work on some TV shows there but plans changed a week before I left and all productions for the film industry shut down. Luckily I have a ton of animation work still so Im feeling so grateful for that and keeping busy as usual. On the positive side it has been so amazing to see how many people are being creative with their time. So many of my friends are making the most amazing art and music right out of their living rooms. I think we are all going to come out of this so strong and united. I didnt have any music shows lined up so it didnt really effect that side of my work. Im feeling pretty optimistic about the whole thing, I really miss my friends but im going to be just doing the same thing I always do…make art and music with what I’ve got around me. Thats all I really can do right now…no complaints.

Asia: What are you hoping to release in the future?

Rob: I have a lot of animation music videos lined up to be released this spring. I will also be releasing music videos for my own music and the rest of the EP I recorded by this summer.

Asia: Explain how hard it is to make a name for yourself in LA. What is some advice you can give to aspiring artists?

Rob: I think hardest part of making a name for yourself in LA is not letting the idea of it get to your head. There are a lot of insanely talented people in this city but there are also a lot of flakey and entitled people in this industry…its not just in Los Angeles. LA is a hype town though… I think the secret is out about that haha. My advice is to just be a good person, surround yourself with a great support system. People that can push you and inspire you. Talent is over-rated in my opinion…hit the grind and hustle and let the work speak for itself.